It’s not often the husband and I get the opportunity for a child free night out so after an excited discussion on where to go and what to do to celebrate his upcoming 40 something birthday.

We decided to book an overnight stay in San Pedro, neighbour to Marbella and Puerta Banus.

We’d been to the new boulevard in San Pedro a few times already with our 3 year old daughter and loved the new look the town had adopted in recent times. 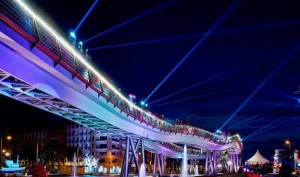 A blend of traditional meets modern with the impressive architecture of the new bridge spanning the boulevard that could easily be mistaken for a structure found in Northern Spain.

We’d already spotted the NH San Pedro hotel on a previous visit after taking a stroll up into the old part of town, we commented at the time that it was a fantastic location to both the boulevard and the town centre too.

I was a little concerned that it might be a bit noisy being quite central and as I’ve lovingly nick-named my husband ‘The noise police’ due to his very low tolerance of excess noise, I hoped any rowdiness from the bars opposite wouldn’t spoil the night. 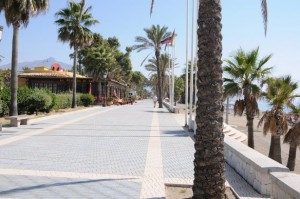 We said goodbye to our daughter leaving her in the safe hands of her grand parents, feeling kind of naked as we left the house with just 1 travel bag between 2 of us. After just 30 minutes or so driving we arrived at San Pedro just after 4pm

We decided to drive straight down the the beach front before checking in to the hotel to Bora Bora; a really nice beach club just a few minutes drive from the centre.

It was a gorgeous 28 degrees and I was craving a cold cocktail however on arrival we were really disgruntled to find that the whole place was closed up.  I mean this was 4pm on a hot and sunny Friday afternoon in May, you’d think the place would have been buzzing.

Undeterred we hopped back in the car and headed up the road to the hotel. Parking is available right underneath the hotel which also services the town centre, it’s €12 per day and not that were tight but that’s equal to at least 2 mojitos. Instead we parked on the boulevard for free and walked 5 minutes to the hotel.

Check in was seamless and we were asked to pay the €73.80 for the room in advance, this included breakfast which was served up until 12 midday on weekends, bonus I thought if we happened to have a rare lie in. 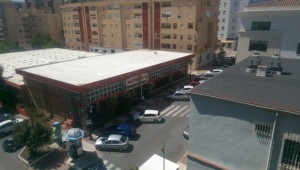 We headed to our room, 408 and were a bit disappointed to find we had a view of a roof top and Maskom supermarket as opposed to the sea. The room was clean although basic and was fine for what we needed.

Starting the Celebrations with a Cocktail

As the hotel is so close to everything, we decided to go out as we were for a few hours and then pop back for a quick change into something nicer for the evening. 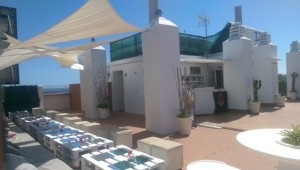 Rooftop bar of the NH

The NH has a rooftop bar; great place to start, we took the stairs up to the 6th floor which opened out onto a lovely big outdoor terrace.  On one side were views of the mountain and the other offered views of the sea, some very nice soulful house music played in the background to complete the setting.

Even though there were only us and the barman there (we were bang in the middle of siesta) it seemed too nice to not have at least one drink.  He came straight over and took our order, I ordered a frozen strawberry daquiri and the hubs a red wine.  The wine came straight away and I was pleased my strawberry daquiri took a while longer as it was worth the wait, perfect for a hot summers afternoon. 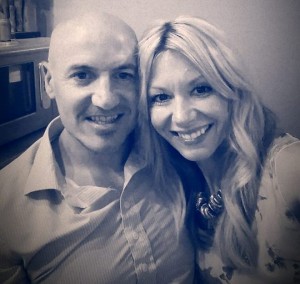 We finished our drinks and headed down the lift and out of the hotel, my friend had told me about an area with some nice places to eat and a bar called pub Charles that did nice cocktails.  This was just a few streets away to the left of the hotel so we decided to give it a go.

Pub Charles was easy to spot on a corner with several other restaurants and bars along the same strip, some open and some  closed for the day.  It was hard to see what this area would be like at night as 5pm is kind of still siesta time and there were very few people around.

We made a mental note to come back later that night after our meal and walked down alongside the boulevard ending up in The Hogan stand which is right opposite the wavy bridge.  A glass of fairly average red and glass of white later, we headed into town up the main street and into the little church square. 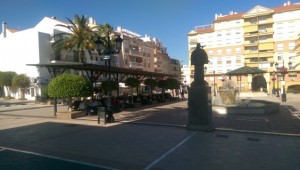 ‘La vecina’ a lovely little bar and restaurant in the heart of the square is a nice spot overlooking the church, we grabbed a table in the evening sun and ordered another wine each.

The conversation and drinks were flowing and as the afternoon drew into evening the place really started to fill up. In fact I don’t think there was an empty table when we left some time around 6.30pm, with many people eating as well as having a drink; always a good sign.

Back in the hotel room, we had 45 minutes or so freshening up and wearing high heeled wedges for the first time in ages I actually felt really dressed up. High heels and 3 year old’s don’t really mix well so I tend to avoid them but this was the occasion to wear them and so I did.

Back outside in the main street it was still fairly quiet with not that many people dining yet in the nearby restaurants to the hotel. We couldn’t decide what type of food to eat so we agreed to check out a few menus first.

A little Italian ‘Il Piacere’ in the main street opposite the hotel but tucked behind a little walled garden looked nice and intimate.  The menu looked ok and I’d heard good things about this restaurant from tripadvisor. 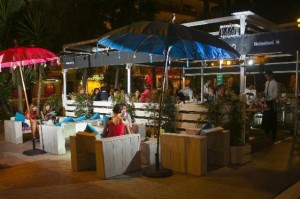 Next up was ‘C’est la Vie’ which I had to admit we were more drawn to than the Italian as the decor was just lovely, all natural wooden materials with a comfy sofa area for drinks. We sat down to look at the menu over a glass of wine, the Asian inspired fusion menu was great and with lots to tempt us, we decided on eating here.

On finishing our wine on the terrace area, we opted for an indoor table as the evening was starting to turn a little chillier.  We were the only ones eating inside and were asked if we’d prefer an outside table but we were happy with sitting inside. 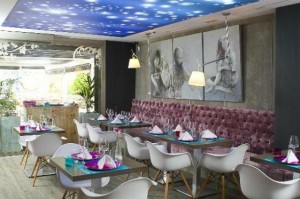 C’est la Vie inside, just as nice as the terrace

We ordered a couple of sharing plates to start; falafel and chicken skewers and for main I opted for the goats cheese and walnut salad and hubs the chicken, washed down by another glass of wine each.

I’m slightly disappointed to say that the food didn’t quite live up to expectations and we both agreed that the starters especially were a little dry and uninspiring despite a lovely sounding menu; the house red and white wines were nice.

One for the road

After dinner we kind of stumbled for one last drink and despite promising to go further afield, we ended up in La Sala which is literally a stones throw from C’est La Vie.

Tables outside on the terrace were still pretty full of diners so we went inside to the more comfy leather chairs where we spent an hour or so chatting over a Tanqueray & tonic whilst enjoying the live music coming from the talented guitarist inside.

At midnight we decided to call it a night before things started to get too messy and crossed the road back to the hotel. Some 9 hours later feeling reasonably well despite the amount of alcoholic drinks consumed we were on the way down stairs for breakfast. 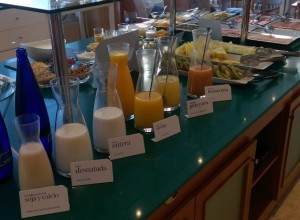 I love hotel breakfasts so was hoping for something yummy although for some reason my expectations were not very high.

In actual fact the breakfast was of a very good standard, a few hot options like scrambled egg and sausages, the rest continental but really well presented and an excellent choice.

There were lots of healthy options too like gogi berries to add to cereal, soya milk and gluten free products as well as lots of fresh fruit. 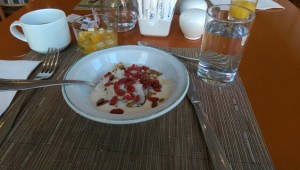 I thought the kids corner was a really nice addition with child friendly bowls, place mats and cutlery as well as breakfast choices appealing to young children prompting me to start missing my little one.  Hang on this wasn’t supposed to happen, we were still on our ‘date’. 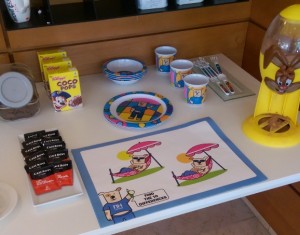 After a hearty breakfast and feeling ready to face the day we packed up and checked out which was just a matter of handing in our room cards seeing as we had already paid.

To summarize a great night made even better by the lack of hang-over.  If you are looking for a nice place to spend a weekend on the beach with a good restaurant and bar scene, then I’d definitely recommend coming to San Pedro.

The NH was ok and I would stay here again, mainly because of it’s great location as there aren’t really any other hotels so close to everything. But if you’re willing to jump in a taxi from your hotel to get to San Pedro, I believe there are other nicer hotels nearby.

So off home to relieve the grandparent of their babysitting duties and to spend a lovely lazy afternoon recovering round the pool.

Been for a night out in San Pedro? Been to any nice bars or restaurants in San Pedro? Pop a comment below to share your experiences..